For years I have been telling myself that if I ever felt I wanted to get into medium format panoramic photography, that I would just buy one of the Fuji g617 panoramic cameras and call it done. The price on the Fuji's aren't too obscene when compared to the cost of other 617 panoramic cameras like the Linhof Technorama, and Fuji has an excellent track record with the medium format cameras they have produced.

Once the itch to try 617 photography got to the point that I needed to scratch it, it was neither the Fuji g617 or the Fuji gx617 camera that I ended up acquiring. In the end, I ended up with a Chinese Dayi 617 S-IIA 6X17 camera and fitted it with a Nikon Nikkor-SW 90mm f/4.5 lens.

While I have zero doubt that the Fuji 617s are fantastic, I ended up with the Dayi 617 because it has features that make it a closer experience to a large format view camera than the Fuji line up. Front rise, and the ability to switch to a ground glass at any time for precise framing and focusing being the significant features.

While attempting to research this camera, I didn't find very much actual hands-on reviews. Although the few blurbs on photography forums that I did find from people who had used the Dayi 617 essentially all boiled down to "Built like a tank." Which, seems to be an accurate statement. Albeit, the tank is more like a low-tech WWI era tank than a modern high tech Abrams tank.

While the build quality is very solid, it has all the technical advances of a camera from about the 1920s. But, considering the Dayi is more of a scaled down large format camera than it is an enlarged medium format camera, there is nothing wrong with this. Just go into it knowing that it offers nothing in the ways of handholding or dummy protection that most medium format camera systems would provide. If your background in photography consists of a lot of large format photography, then you are already used to using this camera, with the bonus that you can't put the darkslide back in the wrong way.

Being a Bring Your Own Lens (BYOL) type of camera, there is no fear of getting poor image quality due to forced to use from low quality cheap Chinese knock-off lens and shutter. You decide and purchase which of the many high quality (or low quality, if you are into that) large format lens that available that you want to use with this camera.

Since the Dayi 617 is a BYOL camera system, the weight and dimensions can change considerably depending on focal length and model of lens you decide to use with the camera. I ordered mine with a cone for a 90mm lens and fitted with a Nikkor-SW 90mm f/4.5 lens. Weight and dimensions for this setup are as such.

The viewfinder provided with the camera is rather crude. When I look through it, the only thing in focus is the bit of the lens cone's roll cage that is visible. Everything else has a nice bit of blur to it. There is no diopter, or focusing mechanism in it either to adjust this.

It is also the kind of cheapness where the edge of the frame lines moves around if your eye isn't centered in the viewfinder. Although from the negatives I have seen so far, it is a bit conservative in what it shows and what gets captured. It leaves enough slop room on the negative if you aren't concerned about using every single square mm in your composition.

While the viewfinder is attached to the shift mechanism, what it shows versus what the ground glass shows when using shift doesn't appear to be accurate at all.

My favorite think about the viewfinder is that it is detachable. I find this useful for when initially eyeing up a scene so I can wander around a bit and use the viewfinder to do a rough sketch of what the final composition will be.

Time for a quick pedantic rant side-rant. The "S" in Dayi SIIA stands for "Shift." Let it be known that this camera does not have shift. It has rise and fall. Rise goes up. Fall goes down. And shift goes left and right. Don't even get me started on how the terminology has been in chaos since digital photographers have started calling everything that simulates overemphasized camera movements to make the subject appear like miniatures as "Tilt/Shift.

After years of shooting with large format cameras on a tripod, anytime I try to use a camera that doesn't have rise/fall on a tripod my vision turns red in a fit of rage as I start to see those vertical lines converge. How do people without do it? I refuse to accept using the perspective tool in photoshop as an answer. No justification for the stance, I just do. Anyways...

The rise/fall is locked and unlocked by the long thumb screw on the left side of the lens. When loosened the entire lens cone and viewfinder slides up and down. The only issue I have is that starting the rise seems to take a good deal of effort. The moving parts seem to stick together, and once enough force is applied it jumps out of position and moves way further than I want it to. So far I've just been doing this, and then letting gravity help me easy it back down to where I want the lens to be.

Future experiments involving some lubrication may be in order. But aside from that, I find the amount of lens rise that is available to be very ample for my work.

Fall, on the other hand, is a different beast. To use fall with the lens, you need to remove the viewfinder and mount a second tripod plate in its place. Then attach the camera upside down on the tripod using this mount.

First off, while there is a guide on the official website for calibrating the lens to the helicoid on the lens cone, I did not have to do this. One I mounted the lens and checked it on the ground glass at several of the marked distances, it was accurate right out of the gate. That was nice.

And also of note is that the camera shipped with a basic spanner wrench type tool for tightening the lens to the lens cone. I appreciated the inclusion of this tool as I've never actually gotten around to buying a spanner wrench in my first fifteen years of shooting large format.

The Dayi 617 has an advantage over most of the other 617 cameras that I looked at in that the film holder can be swapped out with a ground glass at any point. This feature is great because one of the reasons that I bought this camera was because it had front rise. After shooting 8x10 for the past five years, I've gotten good at being confident in hitting my exposures in a single shot. It would get tired real quick if I had to burn up an entire roll to be able to compose a new scene accurately using the rise.

The ground glass itself seems ok, but not great. I feel like the center should be a bit better for the f4.5 lens I'm using. The edges of the frame can be hard to see. I do suspect that it may just be due to the wide-angle nature of the lens. I haven't done much with really wide lenses in my large format history, but I do seem to remember dim edges being a thing the few times I previously did try some wide lenses. Perhaps after I've settled in more with this camera, I'll hit up Steve Hopf and see if we can upgrade the glass and see what happens.

The film holder is a solid, yet basic device. It features a knob advance with no mechanism to automatically stop the frame advancement between shots. To advance the film, you need to open up the little window on the back of the holder and stop it when specific frame numbers appear in the window. Having had some medium format cameras where the timing in the film advance gears has gotten out of tune and caused overlapping frames, the old school manual advance is kind of nice. You will never get overlapping frames unless you mess up by not paying attention and advancing it too far, or stopping on the wrong frame number. When the film is stopped on the proper frame numbers, there is enough space between frames that if you did accidentally overshoot the frame number by a turn or two, it shouldn't cause much of an issue.

The Dayi 617 arrived in a cheap aluminum hard case. I guess it offers some protections for the shipment of the camera, but not that great otherwise. The camera case is lined with some minor padding and is not form fitting to the camera as a quality Pelican case would. There are no compartments or anything to hold any accessories. Whatever you can pack into it will just rattle around freely. I ended up finding an older model Lowe Pro Nova 5 that fits my essentials nicely.

I had to hand holding this camera. Much to my surprise, I found the ergonomics with the 90mm f/4.5 Nikkor-SW lens quite nice. Seems completely useable handheld if you have light conditions to give a high shutter speed, and aren't concerned about precision framing or the possibility of uneven horizons.

Liquor In The Woods Saloon

Vickie and the Vets 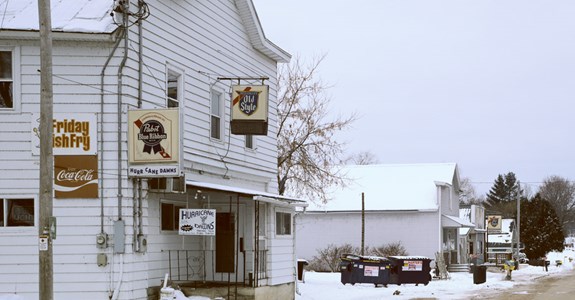 Just a video of me, talking about my Pabst Blue Ribbon/Old Style/Blatz beer sign project I have been working on.

i have just purchased one of these and then came across your article/video, great review and made me less streesed as I hadn't purchased the Fuji G617 :)

Just had a question if you had the time; do you find you need acnetre ND filter with the 90mm lens?

Having used a previous version of this camera I was never able to get the film plane, getting curved lines instead of verticals (especially near the edges).

What is your opinion? Is this problem fixed on the current version?

Nice article and great to see some info about this camera. I currently use a Fuji G617 and it's really nice but I'm finding it somewhat limited and I think the advance lever may be getting out of time.

I'm thinking of buying a DaYi 617 to replace it and I already have an excellent 90mm lens ready to use but I'm wondering how easy it is to focus with the ground glass? Have you used a loupe to get critical focus?

In Reply To Thomas.

Always use a loupe when I'm using GG. No point not too if I'm already taking the effort to use it. Easy enough to focus using the ground glass. Not the best or brightest ground glass that I've ever used, but it gets the job done, although with my 90mm very edges of the frame are tough to see.

In Reply To K. Praslowicz.

Thank you for the reply, I'm curious about the focuser on the lens cone. I haven't seen any info about how they work when they focus, does the barrel inside slowly make its way out? Kind of like a zoom lens? Or does the lens also rotate as you turn the focus ring?

In Reply To Thomas.

It's just a typical helicoid, behaves like any other typical manual focus lens. The lens mount moves in and out without rotating the lens. Here, I took a short video of it for you. https://www.youtube.com/watch?v=lZ-gRmcMnus