My Bronica SQ Experience in 2009

2009 was the first year that I thought maybe I should try a different 6×6 medium format camera than the Yashicamat 124G that I had owned for a few years. Still being in a cheap about my gear mode, a Hasselblad was out of the question. However, during my researching into other 6×6 cameras, I learned about this nice Hasselblad-esque Bronica SQ series. Modern lenses, not too expensive. Sounded good to me!

I placed an order at KEH for a Bronica SQ-Ai Kit and added a lens hood to the order as well. I monitored the online tracking until one day at work when…Delivered! “Oh my God! I can’t wait to go home!” I rushed home after work only to find a very small padded envelope at my doorstep.

“Well this isn’t right. No way the camera is that small.”

Open the package to find just the lens hood. Gave KEH customer service a call and they informed me that they sold out of all the kits before my order was placed. Didn’t inform me, just shipped the rest of the order.

Saddened by having New Camera Day yanked away from me, I browsed to Craigslist to smother my feelings. There I found a Mamiya RB67 kit for about the same that I didn’t just pay for the Bronica, so I bought that camera instead.

My Bronica SQ Experience in 2013

I forget what made me pick up my Yashicamat again in the summer of 2013 exactly. I think probably since it was my smallest non-35mm camera, that I thought it would be good to carry around with me on bike rides. Spoiler: It is good to carry around on bike rides. Whatever the reason, it soon in my mind back on the notion of buying another 6×6 camera to try out. My research brought me right back around to the Bronica SQ series.

This time I bought all the components of the SQ-A separately to secure the best price. An SQ-A body, waist level finder, 220 film back, 90mm PS lens and speed grip. And get this, They all arrived this time!

A little bit bigger than the Yashicamat 124G, but not so much that it would make biking with it be annoying. I loaded up the first roll of film and ran off to shoot it. I was so excited to pick up the first roll to see just how knife edge more sharp the negatives were going to be vs my Yashicamat when suddenly they hit me. LIGHT LEAKS!

The next month was a sad battle of:

At one point I even purchased a separate 220 film back hoping it would solve all my problems. Instead, I just ended up having two iterations of the above loop going at once.

Eventually I did fix the seals well enough on one of the backs that the light leaks went away. I got a few solid months in of biking around with the camera and photographing whatever I happenstance came around without light leaks. Then in early 2014, they came back. I didn’t want to even deal with it again so I just put the camera on the shelf.

Although one day while trying to take the curl out of some large prints before framing them, I did realize that the Bronica SQ-A worked well in a pinch at holding the print in place while it was wrapped around a tube for removing the curling of the print. So that was cool.

My Bronica SQ Experience in 2015

Again in 2015 I found myself throwing my Yashicamat into my bike bag and photographing random things I encountered while exploring. I started scanning my old 6×6 negatives to put a gallery together, and got struck by how I like the negatives from the Bronica better than the Yashica Mat. Once again I got sad because I felt trying to use it again would lead me down a rabbit hole chasing light leaking rabbits. “Maybe I should just buy a Hasselblad?” crossed my mind plenty of times.

Day of reckoning. I’d buy one more Excellent grade or higher rated back from KEH and have one more swing at it.

I would have lost my shit right here if it wasn’t for one thing. The leak pattern was completely different than the previous backs. Where the old backs left a pattern that was due to the seals around the door hinges being bad, these were different. These looked as though the leak was coming in through the dark slide door.

Since Kodak has since discontinued my beloved Portra 400 in 220 format, and the value of the 220 film magazines have plummeted substantially, I decided to put one under the knife and see how the light trap was supposed to work. It was easy to disassemble, and also taught me about the unsecured loose bits that would fall out during disassembly. I studied the light trap and then proceeded with tinkering with the new 120 film magazine.

Once I got it open it was obvious why the back was leaking. The thin metal light seals were beaten to shit and then some. I spent a few minutes bending them back into how they were supposed to look and reassembled the back. Haven’t had a light leak in the ten or so rolls I’ve shot since.

I CAN USE MY BRONICA SQ-A AGAIN!!!

Experiments with the Bronica SQ-a and Fresh Water Submersion

In early 2016 I took my Bronica with me on some cross-country skiing trips. The last day of skiing ended up with some backcountry exploration that took my group onto the frozen ice of Lake Superior. All was well and I finished up a roll of Portra. I reloaded the film out on the ice and we headed back to shore.

A few feet from shore an unfortunate turn of events happened and my trusty Bronica SQ-a found itself taking a bath in the near freezing waters of Lake Superior. So if you were thinking of tossing your Bronica into a lake to see what happens, but are too afraid something might break, let me tell you what happened to mine.

I also need to take a moment to ramble on about what I think might be one of the greatest camera accessories known to mankind; the right-hand grip for the Bronica SQ-a.

Part of my attraction of medium format gear, in general, is that I have a strong love of flash fill in my photographs. Medium format cameras tend to mostly come with leaf shutters. Leaf shutters have the advantage of being able to sync a flash at any speed. Thus, even in the brightest sunlight, I can use a flash to add a little extra punch to the photo.

The only medium format gear I've ever owned that had a built in hot shoe were the Fuji GW690 series of cameras. Everything else required some sort of tangled mess of flash brackets and sync cable to satisfy my flashy desires.

The right-hand grip for the Bronica SQ-a is great in that it is a very sturdy flash bracket, that also acts as a hot shoe. Thus, no wires to knock out of place!

But that's not all! Even if you have no desire to ever use a flash with your Bronica, this is still a great accessory to own for the following reasons. A Boat On Its Trailer Boy By A Blue Bus Fog Rolling in Through Lincoln Park A Woman Takes A Smartphone Photo Of A Tall Ship 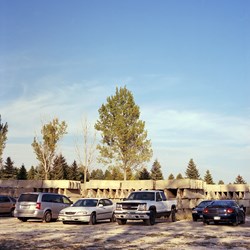 You had some bad luck I actually pieced my entire SQAI kit together from KEH ranging from bargain lenses and backs to excellent body and everything has been great. One bargain lens had more dust than I liked but I have the tools to open it up so I cleaned all the elements. The backs I got are all in good shape too. I had bad luck with an Bronica S2a I purchased from a Japanese seller on eBay “near mint” yeah shutter speeds weren’t accurate and 1/8th would fire at 1/1000 if I was shooting bellow 1/8 and then set it to 1/8 to bracket a shot. The seller didn’t want to take it back without me paying the shipping which was almost more than buying the SQAI and repairing it would have been even more and that’s when I stopped buying bodies or lenses on eBay and moved to KEH. I’ve been pleased with my experience ever since. I recently purchased a “bargain” 4x5 wooden field camera that was practically new the bellows were perfect only one small scratch on the tripod mounting plate.

A thorough review - as I continue to consider this option (like you!) over a Hasselblad.

I'm wondering what type of Metz Mecablitz that is. What a gem of a flash!

In Reply To Simeon.

Wow sorry to hear you had so many issues with light leaks. I found mine at Adorama with the Ai AE prism, the motor grip, and a 120 back all in great shape for pretty cheap. I bought some more backs from KEH and Roberts Camera on eBay, mostly Ai but one SQ-A in varying conditions and none of them had problems either. I guess I just got lucky.

I too considered a Hasselblad (and honestly still do) but curiously all my friends that owned one were less than enthusiastic in their recommendations based on long-term reliability and repair costs. Some of them had theirs lock up on shoots and required an expensive rushed repair more than once which was surprising.